The area of Upper Lake Maggiore is included in the north of the lake basin, one that from Cannobio, the last inhabited before the Swiss border, comes up to Ghiffa, a town on the outskirts of Verbania. Surrounded by lots of green lake nature, the four most important centers,Cannobio, Cannero, Oggebbio and Ghiffa, anjoy spectacular views of the three shores of Lake Maggiore: that Swiss, that of Lombardy and that of Piedmont. Each town holds its own history and its own traditions to be rediscovered. In Ghiffa you can visit the Museum of the Hat or reach Sacro Monte of SS. Trinity, Baroque complex located in a magnificent location overlooking the Lago Maggiore. Going to Switzerland, Cannero Riviera offers a view of Malpaga castles, the so-called "Castles of Cannero", fascinating ruins resting on two islands visible from the shore. The beauty of this area is given by the perfect combination of nature and art. All along the coastal highway 34, it is possible to admire villas and gardens overlooking the lake and at the same time observing the many rural realities, perched on the surrounding mountains and still capable of preserving traditions rooted in time. Finally from Cannock leads to Val Cannobina, extended valley for 11,000 hectares near the western shore of Lake Maggiore, characterized by a diverse landscape and fascinating.

The area of the Gulf Borromeo is circumscribed by the part of Lake Maggiore, which extends from Verbania to Stresa and that includes, in addition to the delights of the Borromeo Islands, also the hilly area near Verbania. The beauty of the Gulf of Borromeo lies in perfect marriage between art and nature. The hand of man has managed over the centuries to build expertly adapting the forms of nature on the lake and its shores. The towns of Baveno and Stresa are characterized by luxury and elegance conferred by stately mansions, found along this stretch of the shore of Lake. A romantic atmosphere and refined characterizes these real "pearls" of Lake Maggiore, which each year attract thousands of tourists from around the world. In front of Stresa, in the heart of the Gulf, the three Borromean Islands create a charming, timeless charm. Not far from Stresa is Verbania, the provincial capital, a lively tourist center, appreciated for nineteenth-century villas as Villa S. Remigio, Villa Giulia and Villa Taranto, whose gardens are among the most famous and popular in Europe thanks to the charming floral decorations that characterize them. Going up the hills surrounding Verbania, they discover dozens of small villages, with the typical characteristics of mountain villages with panoramic views of the Borromeo Gulf and its islands. From these heights begins then the Val Grande National Park: the largest wilderness area in the Alps.

The last part of the Piedmont shore of Lake Maggiore is included in the section that goes from Belgirate in Castelletto Ticino, and is characterized by the presence of several places of artistic and cultural interest. In Belgirate, for example, the small Romanesque church of Santa Maria: dating from the twelfth century, the religious building is placed in a raised position compared with the village, under him. A Massino Visconti, at the height of a 4 km long panoramic street, stands the sanctuary of San Salvatore: located in a wooded hillside, dominated by birch and beech trees. Continuing along the highway 33, you will find many houses and villas, anywhere encircled by lush parks, such as Villa Correnti, built in the late nineteenth century by the Senator of the Kingdom of Italy Cesare Correnti, and the nineteenth-century Villa Faraggiana of Meina, neo-classical building surrounded by a large park. Towards the end of the Lake Maggiore, it is Arona, primary home of the Borromeo family, which for centuries had a strong influence on the areas of the Lake. The Colossus of San Carlo, impressive work 23,40 meters high, depicting the cardinal San Carlo Borromeo, allows you to enjoy the breathtaking view on the Lombardy and Piedmont shore of Lake Maggiore, looking out the windows that open onto the robe and looking through the eyes of the statue. Finally in Castelletto Ticino, closing the country of the Piedmont side, you can admire the fortress of Castle Torriani - Visconti: erected in the Middle Ages, the castle belonged to the lordship of the Torriani and Visconti and still retains the imposing square tower. 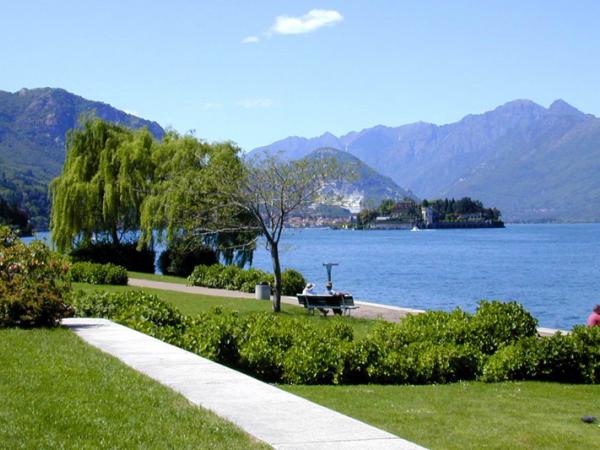 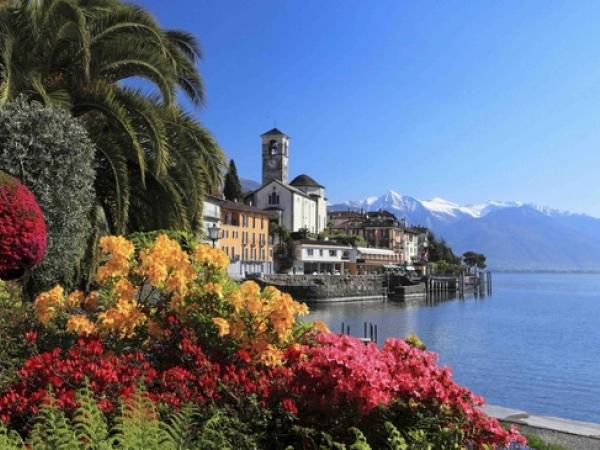 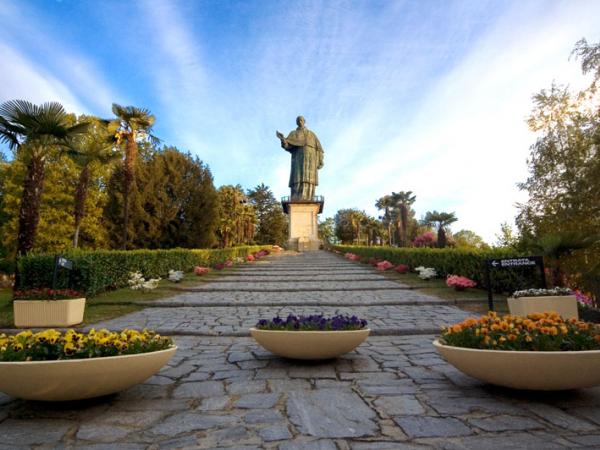